Last week, I FYI-ed my writer chums about being patient with revisions, relaying how it’s taken me nearly a year to revise my latest book. A friend reached out and recommended I take that post down because “You shouldn’t post about your writing or revision process. Agents are going to reject you if they read that and think you do things you shouldn’t.” If you’ll indulge me (if not, close the tab now) I’d like to address that concern.

First, no matter how much some perpetuate the myth, agents aren’t heartless monsters combing the interwebz for reasons to reject you when you eventually query them. Nuff said.

Second, I don’t plan to take a year revising any book I’ll write going forward. For the two books I queried before my current novel, I made mistakes in both the writing and the revising (and so, subsequently, the querying). Taking extra time with book three allowed me to identify where I’d gone wrong process-wise with the first two. What I learned will prevent me from now making certain mistakes in the first place, and write/revise smarter and more efficiently.

Last, writers should blog/tweet/whatever about their experiences, because we can all learn something from each other. We’re all students and teachers in this mad escapade of trying to line up 100K words in a pleasing order. Play nice and share.

Don’t be afraid of agents, grow beyond your mistakes, share what you know.

Yeesh! I’ve been busy. Writing, reading, beta reading – it’s a wonder I even have time to remember to write these little posts (yes I always remember, but sometimes push them off, obviously). A lot going on (and I have two of these to write to catch up), so let’s keep it simple. In honor of Presidents Day, for this FYI I’m just going to drop some general well-wishes here for everyone from one of my favorite movies: 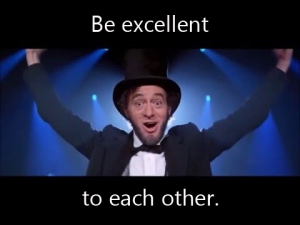 So the silly season is once again upon us, that time of year where all sanity and reason abandon those writers possessed of the notion that committing fifty-thousand words in a single month is a good idea. What folly, to bleed upon their keyboards through November, as if their souls ache for torture like that willfully sought by those sinners hurling themselves into Dante’s sixth circle of Hell, intent on the corruption of that sacred process of creation known as writing.

Last year, I wrote a piece offering suggestions on how one might make National Novel Writing Month easier on themselves. If you didn’t read that post, the villainous premise is simple enough:

#NaNoWriMo is not about writing a good book, it’s about getting 50K words into your document. Winning is all that matters, and you do that not by being a good, honest writer, but by hitting your daily word count, plain and simple.

I shared some villainous tips (as in things other writers won’t think “honest” or “scrupulous” or “fair”) on how to get your daily word count swole, but surely you didn’t think I gave away all the dark secrets in that single post, did you? If so, surprise, fools! Here are some additional rules for winning NaNoWriMo.

Embrace the dark side, kids. We have better toys.

END_OF_DOCUMENT_TOKEN_TO_BE_REPLACED

This Friday I’ll be on a mountain in NH, hopefully with no signal, next Friday I’ll be in Seattle gearing up to hike Mt Rainier, and the following Friday I’ll be in Boston for some haunted fun. Because of this whirlwind coast-to-coast travel (and everything in between) I’m going to temporarily suspend your Friday Morning FYIs. Fear not! FMFYI will return in November. Enjoy my beloved October, everyone 🙂

I’m late this week (what else is new?) because I had to take the time to process how I feel about the two political conventions that took place over the last few weeks. I didn’t watch them, mind, because if I wanted to watch primates thump their chests and throw crap at each other I’d go to the zoo where I can find creatures that actually should be preserved. Turns out I didn’t need to, though, because my social media feeds were (and continue to be) riddled with elitist asshats posting quotes and links to partisan opinion pieces, and telling me and everyone else how we should vote. No, that’s not right. That’s not strong enough. They’re on their soapboxes telling us we have a MORAL REPONSIBILITY to vote a certain way. In response I’ve been handing out unfollows like wheatgrass samples in a health food store (that analogy works, I swear) to those people who don’t seem to know how free voting works, what it represents, or how, within a political system as massive as ours, your vote is your only mechanism of protesting something you don’t like. That’s brings us to this week’s FYI:

The upcoming US Presidential election is a sh!tshow, and not just because the leading candidates are a raving lunatic and a habitual liar. No, what’s worse is we still have three and a half months of faux morality warriors panicking, ranting, and flooding us with their ‘I’m voting this way,’ posts nobody gives a f*ck about, ‘You have to read this!’ articles (barely) written by lecturing nobodies on partisan websites, and everything else they’ll use to convince you you’re an awful person if you vote third party or whatever way they’re not. It’s a dystopian nightmare that would sell ten million copies, a six film series, and at least one TV show, probably on FOX or Netflix, if we could only somehow have a love triangle develop and…

Sorry… I just threw up in my mouth a little.

Anyway, my point here is if you’re a rational, well-informed person, these people should be ignored like those Tinder matches you regret meeting, until December. No, blocking them won’t hurt their feeling. They have plenty of other ‘mobilized’ knuckleheads to throw them Likes and make them feel superior to the rest of us who just want to not-be lectured to.

And in November, vote any way you damn-well want.

Search the site for stuff